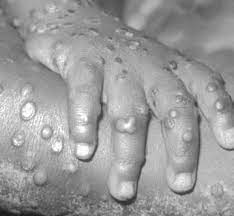 Nigeria’s social media went abuzz recently with the western world reporting with pictures that Monkeypox is an African disease, despite the recent outbreak which was recorded to be in U.S.A and U.K.

Is it really an African disease?

Monkeypox is a viral zoonosis (a virus transmitted to humans from animals). It is a disease of global public health importance as it not only affects countries in west and central Africa but the rest of the world.

Monkeypox can be caught from infected wild animals in parts of the west and central Africa. It’s thought to be spread by rodents, such as rats, mice, and squirrels.

You can contact it from an infected animal if you’re bitten or touch its blood, body fluids, spots, blisters, or scabs.

It may also be possible to catch it by eating meat from an infected animal that has not been cooked thoroughly, or by touching other products from infected animals (such as animal skin or fur).

Monkeypox can also be spread through:

What are the symptoms of Monkeypox?

The illness begins with:

A rash usually appears 1 to 5 days after the first symptoms. The rash often begins on the face, then spreads to other parts of the body.

The rash is sometimes confused with chickenpox. It starts as raised spots, which turn into small blisters filled with fluid. These blisters eventually form scabs which later fall off.

The symptoms usually clear up in 2 to 4 weeks.

There are number of measures that can be taken to prevent infection with monkeypox virus:

Treatment for it aims to relieve symptoms. The illness is usually mild and most people recover in 2 to 4 weeks.

If you’re diagnosed with it, you may need to stay in a specialist hospital. This is to treat and prevent the infection from spreading to other people.

Finally, you should speak to a doctor if you have been in close contact with anyone suspected to have monkeypox as you may be offered some protective medication against it.